The New England Patriots remained undefeated this weekend following their Thursday night 36-7 win over the Miami Dolphins. Moving onto week nine, they are 7-0, along with the Cincinnati Bengals, Denver Broncos, and Carolina Panthers. While these other undefeated teams may have the talent to keep their winning streaks alive, they are missing one key ingredient New England does have: vengeance.

And that answers that. The Patriots are taking no weeks off. Kill Everybody Tour. Goodell made us do it. 19-0. See you in San Fran

David Portnoy of Barstool Sports has claimed the 2015-2016 season to be the Patriot’s “Kill Everybody Tour.” Mike Florio of Pro Football Talk has called it the “Eff You Tour.” Adam Schein of CBS Sports Network has named it, simply, “Brady’s Revenge Tour.” No matter the name, it is clear that every Sunday (or Monday or Thursday depending on the week) the Patriots are not merely playing for themselves, but for sweet Deflategate revenge.

For those of you who may have forgotten, this isn’t the first time we’ve seen the Patriots in this position. In 2007, the NFL disciplined the Patriots for an incident that came to be known as Spygate. During the September 9, 2007 regular season game versus the New York Jets, the Patriots were filming Jets defensive signals from their own sidelines.

While filming defensive signals is not illegal in the NFL, as of 2006 there were specific locations that teams could and could not do this from. The sidelines was one of these illegal locations, so as punishment, the NFL fined Patriots head coach Bill Belichick $500,000,  fined the Patriots organization $250,000, and docked the team their 2008 first-round draft pick. 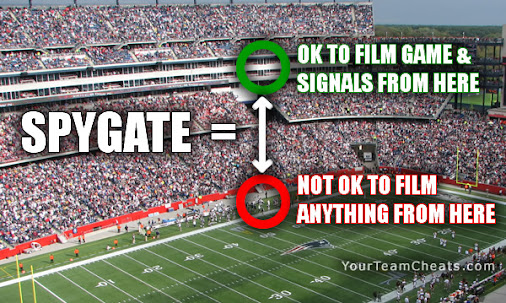 Above all, Spygate gave football fanatics nationwide a legitimate reason to hate the Patriots. Coaches, players, and fans alike called New England’s three millennial Super Bowl wins into question. They were cheaters, and should be stripped of their winnings. Who knew how long they had been cheating? Never mind the fact that they weren’t actually doing anything illegal until the NFL created the new rule about filming in 2006.

So how did the Patriots handle the criticism? They went 16-0 in the regular season. They made it to the Super Bowl where a fluke play ruined their undefeated season. Sure, we had the talents of Brady, Welker, and Moss that season. But, not every team goes out and wins by margins like this. Only teams playing with vengeance do.

We all know more details than we probably want to about the Deflategate scandal that plagued the Patriots organization this past summer. Once again, people from around the league had a reason to hate New England, even if this time the Patriots had not done anything illegal. New England fans knew that coming off their Super Bowl XLIX win, and the crazy investigation that followed, their team would take the field with pure intensity this past September. The overturning of Brady’s suspension only heightened the dominance that the Patriots would bring to the NFL this year.

Every single game the Patriots have played in so far this season has been played with the same conviction as a playoff game. Edelman played with a severely broken finger during the Colts game. Brady was furious after a missed 1st and goal in the fourth quarter of the Miami game. Jamie Collins cleared the Colts offensive line to successfully block a field goal attempt. While the Patriots organization may claim they are not trying to prove themselves, there is no question that the team is out for blood.

RT if you like blocked extra points
FAV if you enjoy them when Jamie Collins hurdles the line #NEvsIND http://t.co/19erOfR4VU

Week nine should be an easy win for the Patriots as they take on the 3-4 Washington Redskins at home. Although ESPN released a report earlier this week about the NFL sweeping the Jets locker rooms at Gillette for electronic listening devices, no sign of foul play was found. While the Patriots organization did not comment much on the matter, we will surely see their reactions on the field comes Sunday.

Clearly, the NFL has not learned their lesson about attacking the New England Patriots. The more you criticize this team, the harder they play. The more controversy surrounding them, the more they win. Their revenge tour will not stop until they are Super Bowl Champions, again.