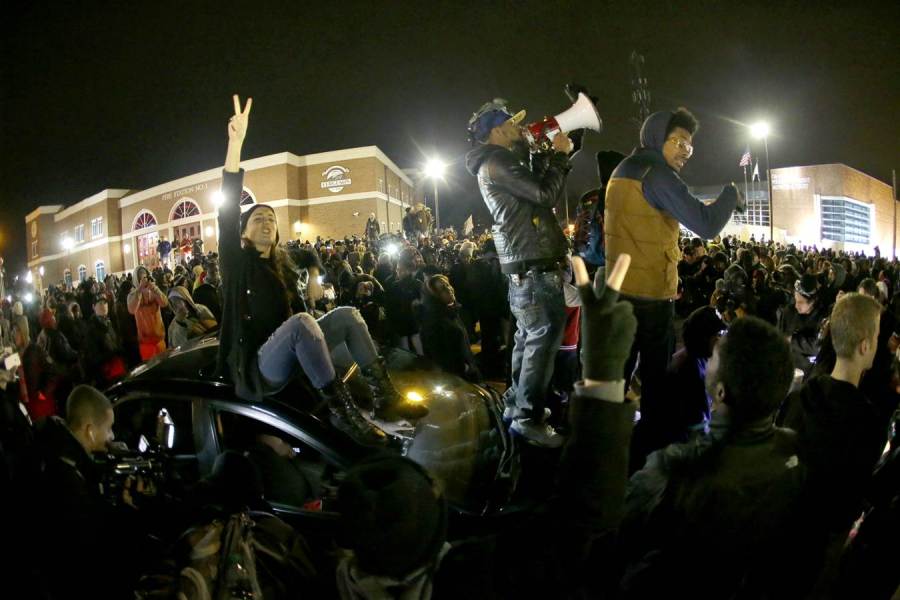 As Prosecutor Bob McCulloch prepared to announce the decision of the Grand Jury Monday, crowds filled the streets throughout Ferguson, Missouri. The long-awaited result triggered a series of violent and non-violent protests throughout the city starting immediately news of the confrontation surfaced.

Demonstrators gathered across the country in major cities such as Los Angeles, New York, Philadelphia, Detroit, and Chicago after the verdict was released.  While most protests were carried out peacefully, demonstrations in Ferguson turned to violence with the burning, looting and vandalizing of numerous public buildings, stores and police vehicles. Missouri Governor Jay Nixon issued a State of Emergency and the National Guard was later called in. Following the announcement, the American Civil Liberties Union issued a statement saying that while many police officers “carry out their jobs with respect for the communities they serve, we must confront the profound disconnect and disrespect that many communities of color experience with their local law enforcement.”

In response to the protests, President Obama made a televised statement urging the nation to remain peaceful and accept the verdict saying “We are a nation built on the rule of law, so we have to accept this decision was the grand jury’s to make.” He also asked that police enforcement engaged with protestors to act with “care and restraint”.

As NBC News reported, the Brown family released a public statement saying, “We are profoundly disappointed that the killer of our child will not face the consequence of his actions” while encouraging supporters to “channel your frustration in ways that will make a positive change”. Their statement ended with a call to action. “Let’s not just make noise, let’s make a difference.” Brown’s parents began a press conference this afternoon speaking out publicly for the first time against the Grand Jury’s decision.

Since the riots of last night’s protesting, over 150 shots were fired, tear gas was used thrown nationwide, and fire-fighters have extinguished the flames of cars and over a dozen buildings. 82 arrests were made, with 61 in Ferguson alone, the Associated Press reported. Social Media boomed with commentary, photos, videos and heartfelt engagement around the nation. The debate has sparked heated conversations online over the past few months and has culminated to last night’s events.

We’re learning more about evidence that led the Grand Jury to find no probable cause to indict Darren Wilson.  The officer did an interview with ABC News.  His attorney’s also released a statement which did not seem to show any signs of Wilson seeking to return to active duty in Ferguson and leaves a great deal to question what will happen next.